Munich is like Marmite – you either fall in love with it or you never come back. It’s the so-called capital of Bavaria and sister to Berlin that has never got along with the other. If you have to compare Berlin and Munich, Berlin would always be an edgier one while Munich would be the smarter sister with an expensive taste. 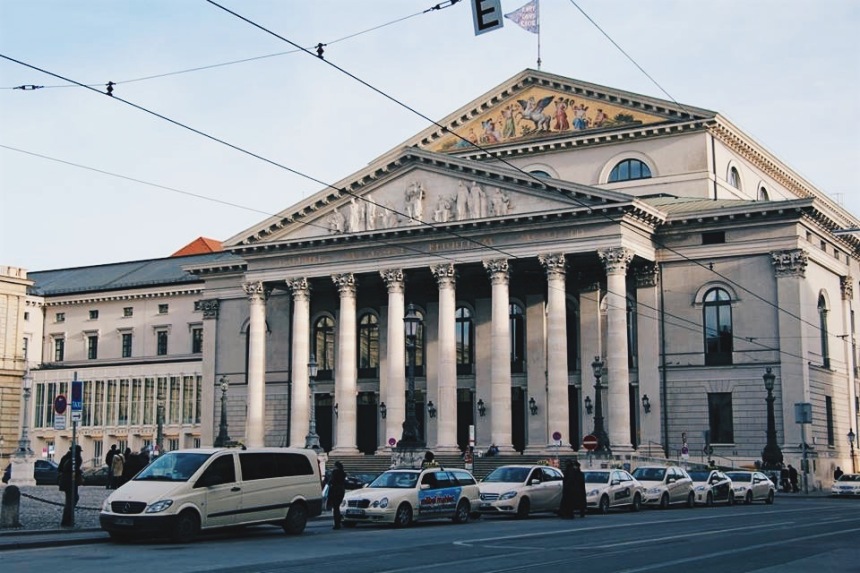 Munich is what I call “my home away from home” so when someone comes with me for a very first time, I want to show them what I love about it the most. I know you know that Munich has got the biggest beer festival in the world called Oktoberfest but it ain’t just beer and drunk people, it is a city of art, culture and quality lifestyle. In Munich, people like to celebrate life and relationships. Yes, they still sit at the dinner table talking to each other, not texting one another. You will find friends, families, work colleagues hanging out together no matter what day of the week it is because relationships are simply important here. Due to that reason, there’s always lots going on – events, festivals, fairs, open-air cinemas, anything that would bring community together. 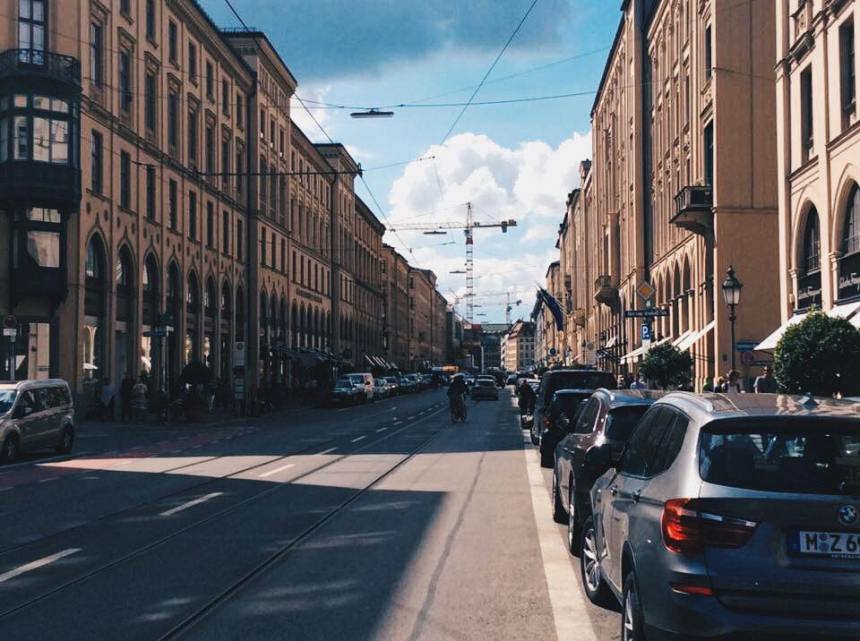 Every year Munich welcomes thousands of tourists and even though it’s a very popular European destination, it is still very German, or shall I say very Bavarian? You will not be able to have a full-on conversation in every place you pop in if you don’t speak German. Most places will reply to your do you speak English with a little bit. So be prepared to learn a few words on the way to help you enjoy Munich experience to the max! (Servus is a good way to start, a very Bavarian word for both Hello & Goodbye, just like Italians do)

In Munich, all roads lead to Marienplatz (kind of). If you come to Munich by plane, train or bus, most likely you will end up going to Marienplatz (after central station called Hauptbahnhof) for a short stroll around or a connection to another place in the city. No matter where you want to go to in Munich, you will most likely be able to get there from Marienplatz, so keep it in mind! 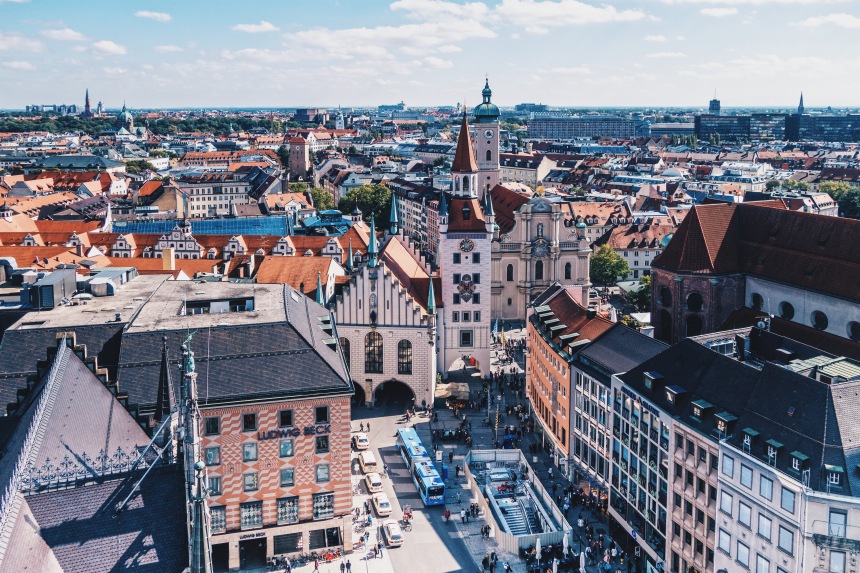 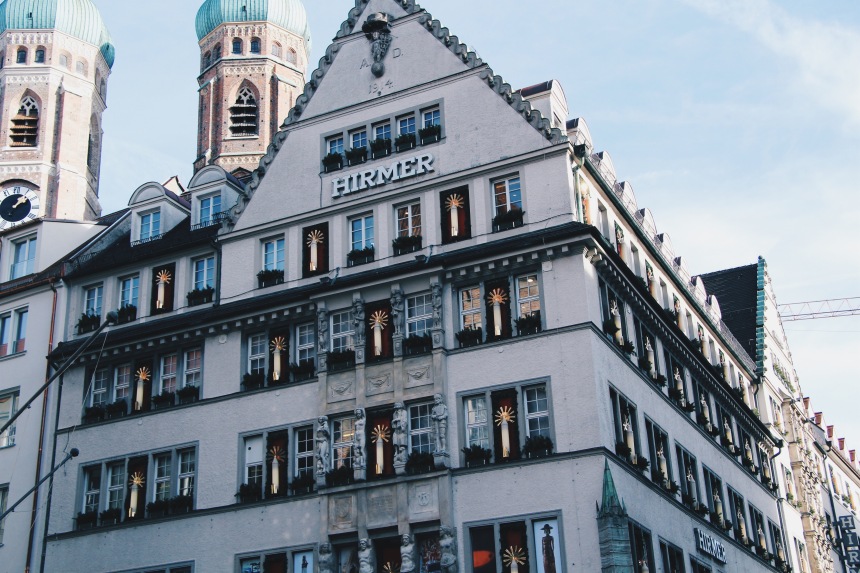 Rathaus-Glockenspiel, famous clock display telling the story of the marriage of the local Duke Wilhelm V (also the founder of the famous Hofbräuhaus) to Renata of Lorraine, is also in Marienplatz. At certain times every day you can see those little figures move and that’s what a lot of people coming there are waiting for. 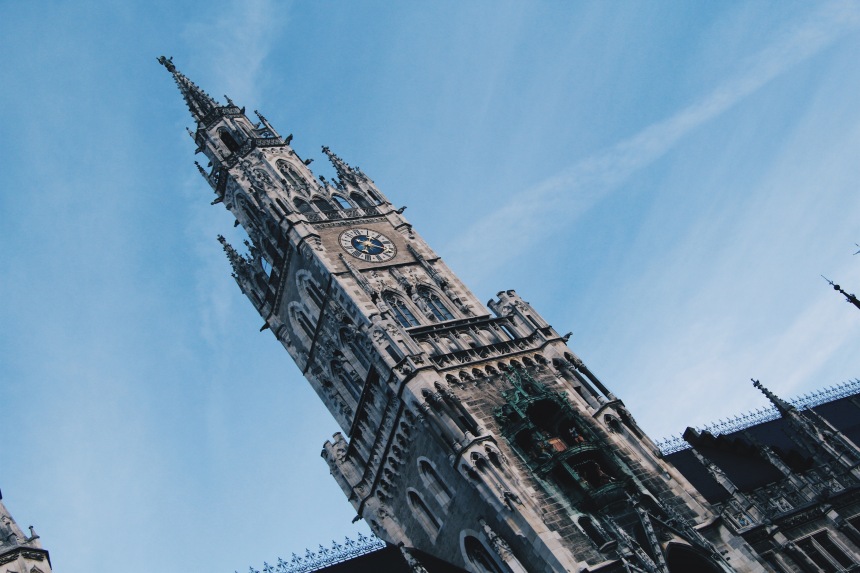 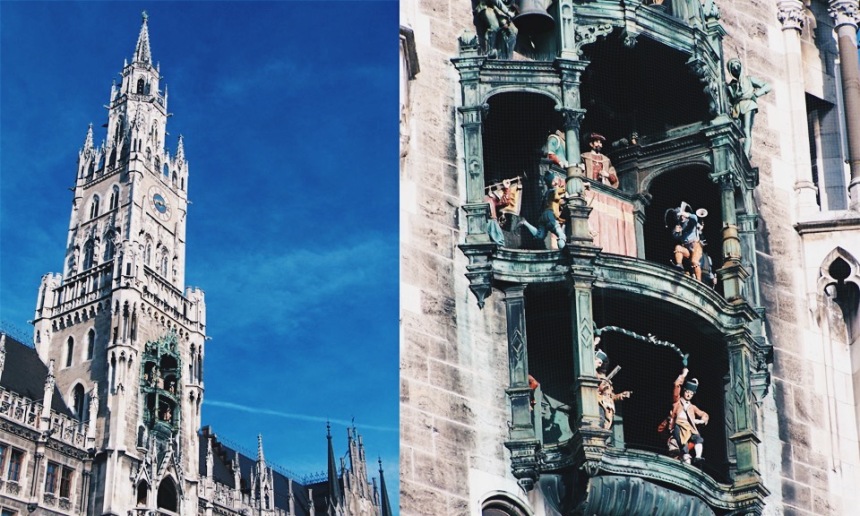 One of my favourite places in Munich is the English Garden, stretching through the city centre to northeastern part of Munich. It’s one of the biggest parks in the world, even bigger than New York’s Central Park! The English Garden is a great place to have a stroll or run around in good weather. It also attracts picnic and beer lovers coming for a stein at the famous Chinese Tower beer garden. The great thing about this place is that you can bring your own food and share it with your friends while having a cold stein of beer! Surfers, yes river surfers, also love English Garden and use Eisbach river for surfing while entertaining passing locals and surprising tourists.

Where the best views at? One of the best city views opens up from the top of St. Peter’s Church and it costs you 1 euro to get up there. It’s a long way up but if you have the time, energy and strong legs, it’s definitely a winner! If you want an easier option with a lovely (but not as good) view of Munich, check out the Olympic Tower. It costs a little bit more to get to the top but you will be taken up by lift so it’s a quicker and less stressful option for families or people who simply do not want to walk all the way up. Also, the Olympic tower has got a big roof terrace, therefore, even people scared of heights will be having a good time! 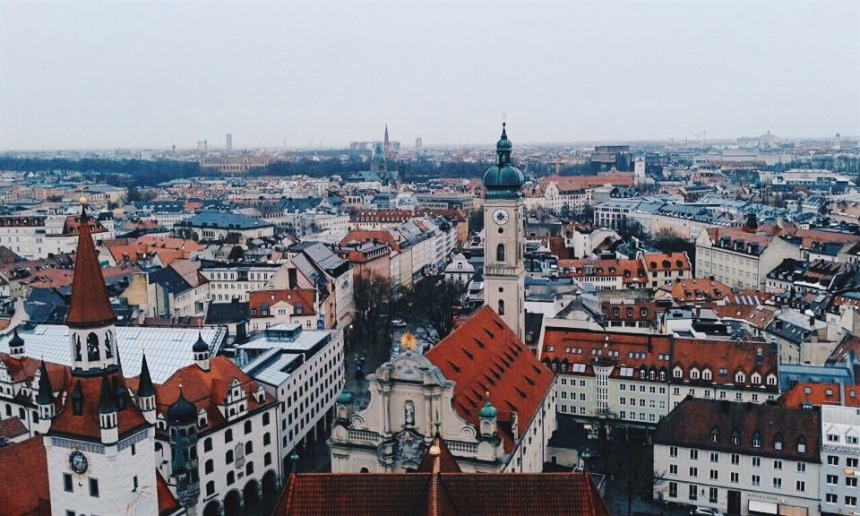 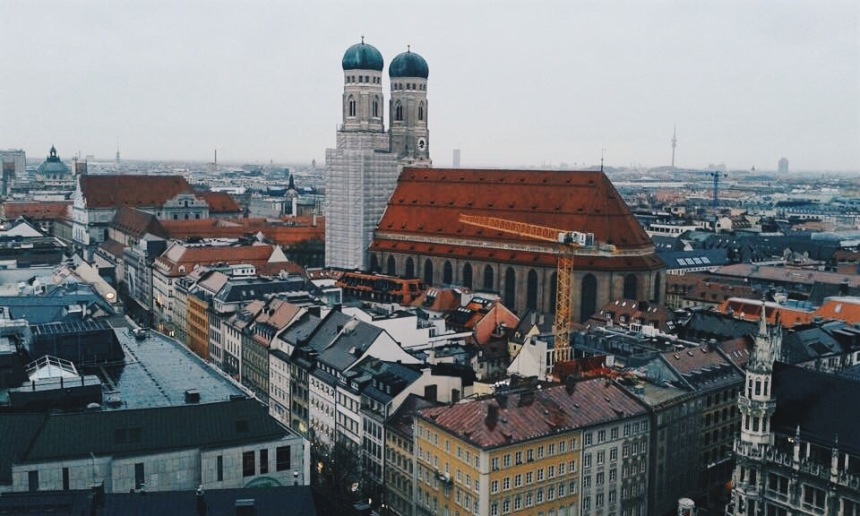 Another thing Munich is famous for is its museums. There’s so many of them covering a wide range of industries and satisfying everyone’s taste. Personally, I am not that into museums and you will not find me visiting museums in every city I travel to but there’s a few places in Munich that are worth seeing if you have more spare time. If you are on a short trip – leave it for next time, it can wait. My personal favourite is Kunsthalle Munich which is a contemporary art museum. It holds a mix of classical and modern artworks by Western artists. Currently Kunsthalle shows Peter Lindbergh’s exhibition called From Fashion To Reality and is a must to fashion, photography and supermodel era lovers. 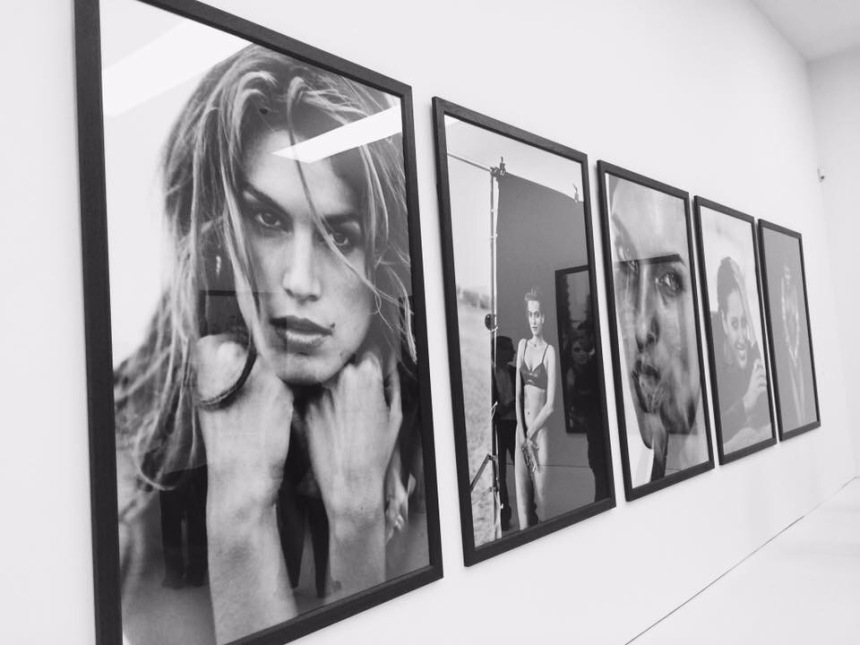 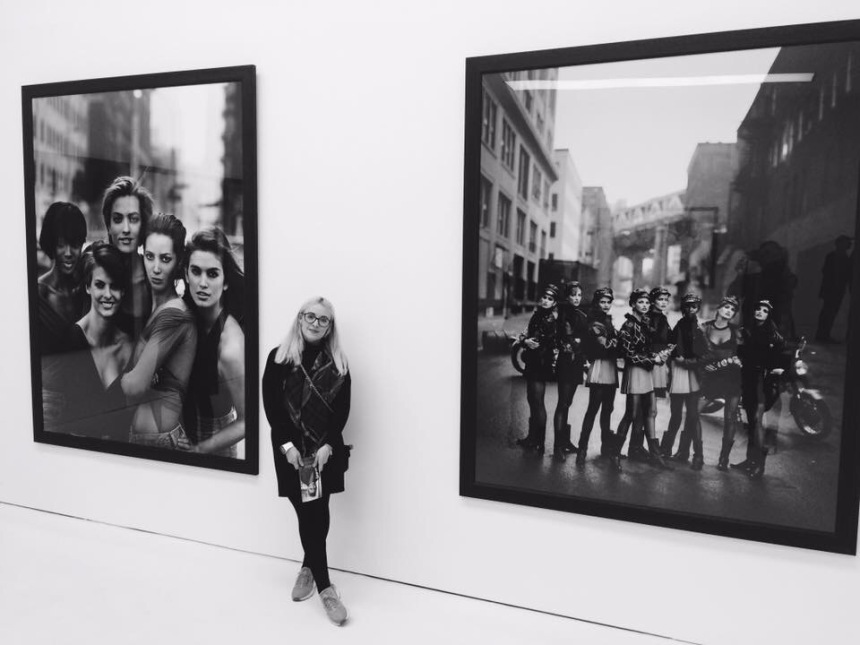 Another place to visit for car enthusiasts – BMW Museum. It takes you through the times and development of BMW and showcases the best BMWs that have ever been created. 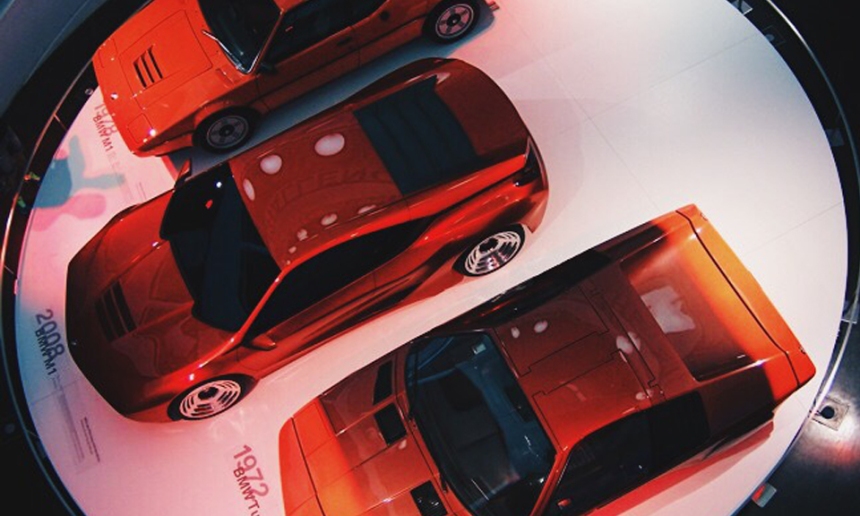 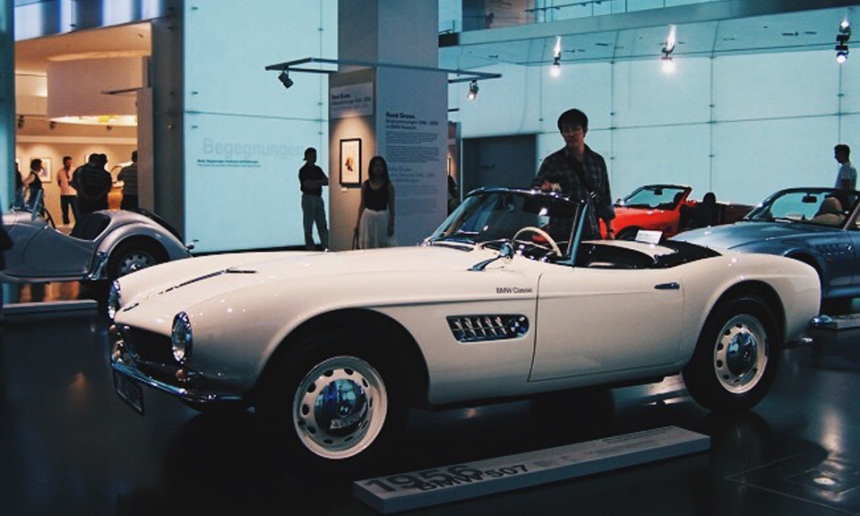 Other few museums you might be interested in are The Deutsches Museum (the largest science museum in the world) and Alte Pinakothek (one of the oldest galleries in the world and has got famous collections of Old Master paintings).

Want to try as much local food as you can? Check out Viktualienmarkt, located at the end of Marienplatz, just a minute away from the city buzz. It offers a great range of local produce to take away with you or you can have a local cuisine in the beer garden on-site. 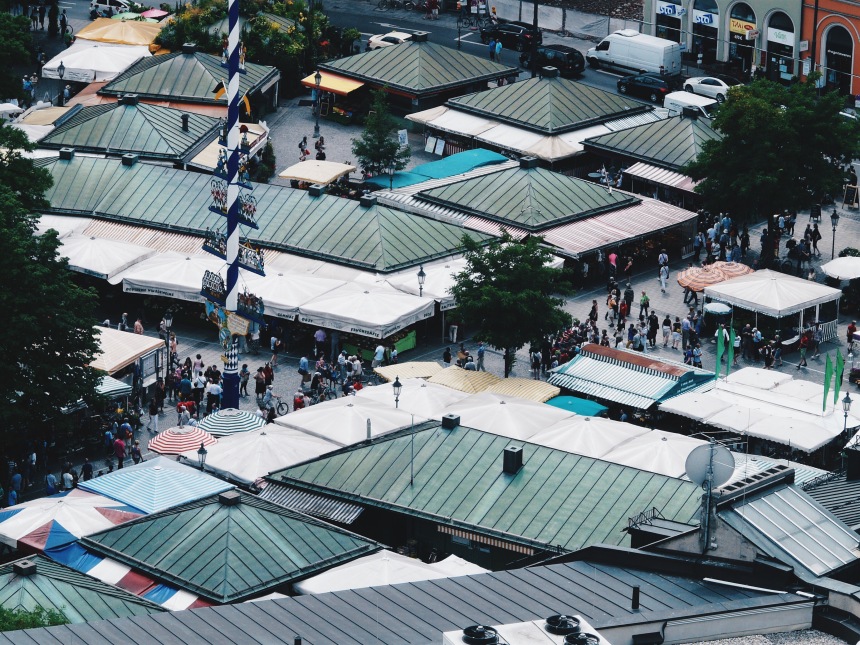 I always love to come to Viktualienmarkt when I’m after a quick bite to eat or want to have a beer outside and watch people passing by. It’s close enough to the city but far enough from the masses. Just what you want after a day of exploring. 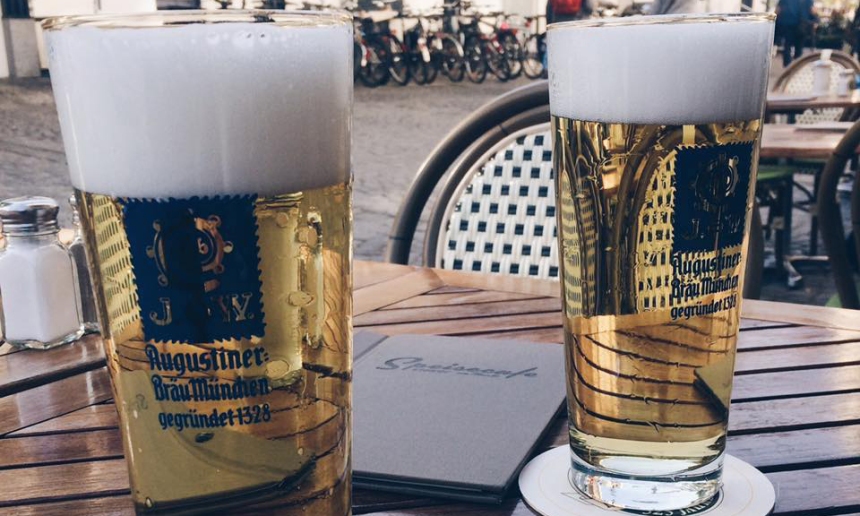 I know that a lot of my friends who went to Germany were scared to try traditional food as it was something out of their comfort zone. So if you want to visit a Bavarian restaurant but are not sure of what to have I have a few tips… First, try brotzeitplatte which is a plate of all best things Bavarian – bread, meat, cheese and spreads. It’s simple and most of all, things will look familiar & will not scare you. We normally share them across the table so it’s a good snack or starter that could start off a good evening or compliment beer. Sausages are also your safe bet and if anything they will taste a few times better in Germany! My English boyfriend fell in love with a few things German too:

Next to Marienplatz you can find a famous Höfbräuhaus beer hall which was built in 1589. Today the place is very popular with tourists who want to experience local culture and traditions. It’s an incredibly big place and it might get noisy at times but that’s just Bavarian culture to you. As some people might say that the place has lost its vibes due to tourists, you still have to stop there, even for 10 minutes, to soak in old beer traditions of the country that seems to be doing it best. If I were you, I’d have a look around or grab a stein of beer and move on – you can get better food elsewhere. After that, go to Augustiner Keller. It is another beer hall & garden in Munich that has great beer traditions, lovely local food and Bavarian spirit. It will still be busy during peak times but is not as packed with tourists as Höfbräuhaus! 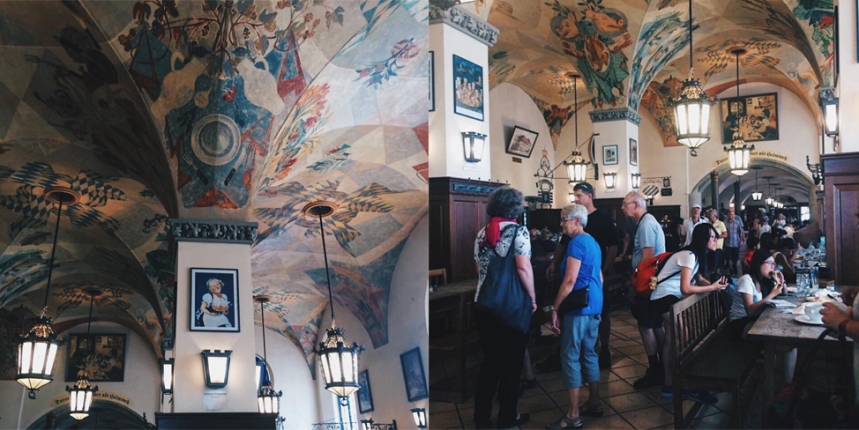 If you are a football fan, you know that FC Bayern Munich lives here. Getting tickets to Allianz Arena is almost mission impossible but you can still enjoy your experience while taking an Allianz Arena guided tour and travelling through the history and times in the museum located inside the arena. There’s plenty of English tours on a daily basis, so there is no reason not to take the tour. 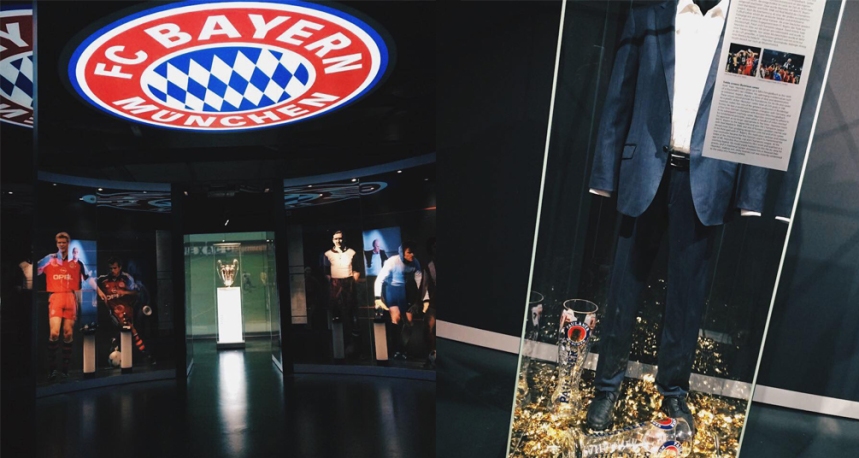 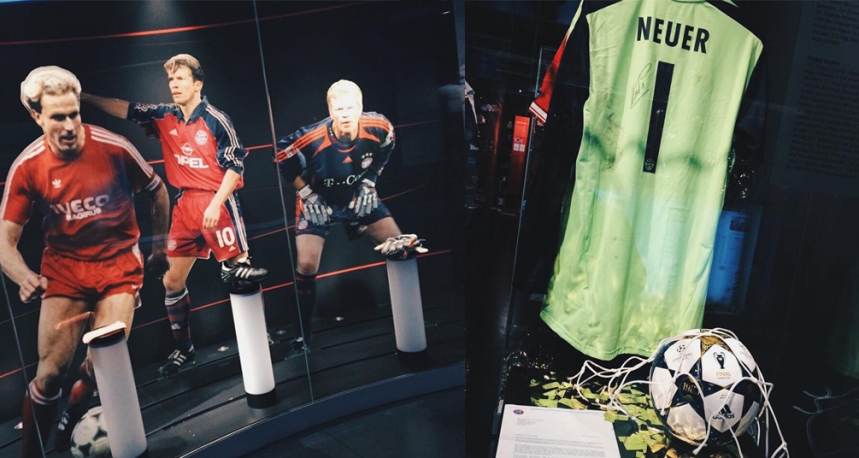 Also, if you are lucky, Bayern Munich players tend to have open training sessions at Säbener Straße where you can go to their training ground and watch them train!

Game on, but where shall I watch it? Stadion an der Schleißheimerstraße should be your choice! It’s a dedicated football bar that welcomes all supporters of all clubs around the world and showcases games of different leagues. The place has got its character like no other and if you watch FC Bayern Munich play there, you are in for a good night!

If you decide to visit Munich in September/October when the beer festival is on, be prepared that hotels are selling out quickly and prices for flights & hotels shoot up! So if you are after a budget trip to Munich, you might want to go on an alternative date. Oktoberfest attracts a lot of people from around the world, therefore, the city gets incredibly busy, many places are reserved in advance and you will find yourself trapped. If you are coming for Oktoberfest itself, prepare for the time of your life! 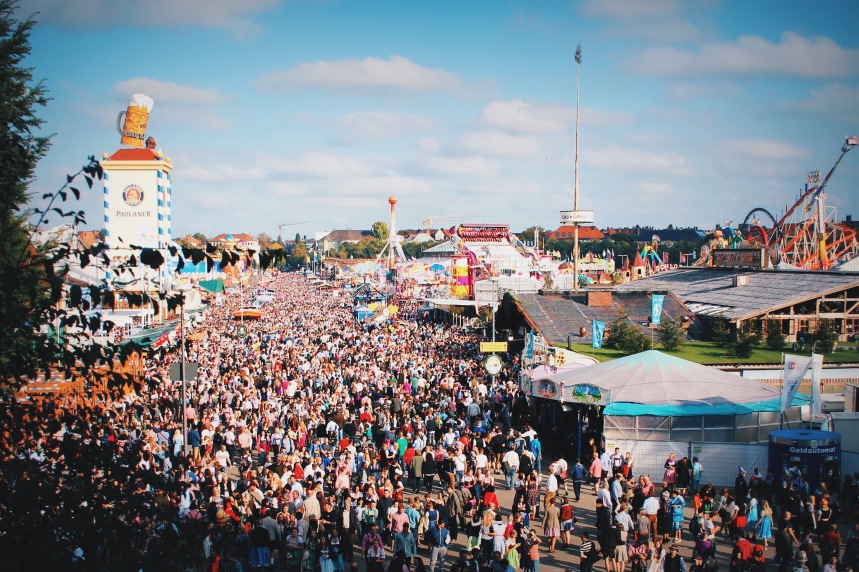 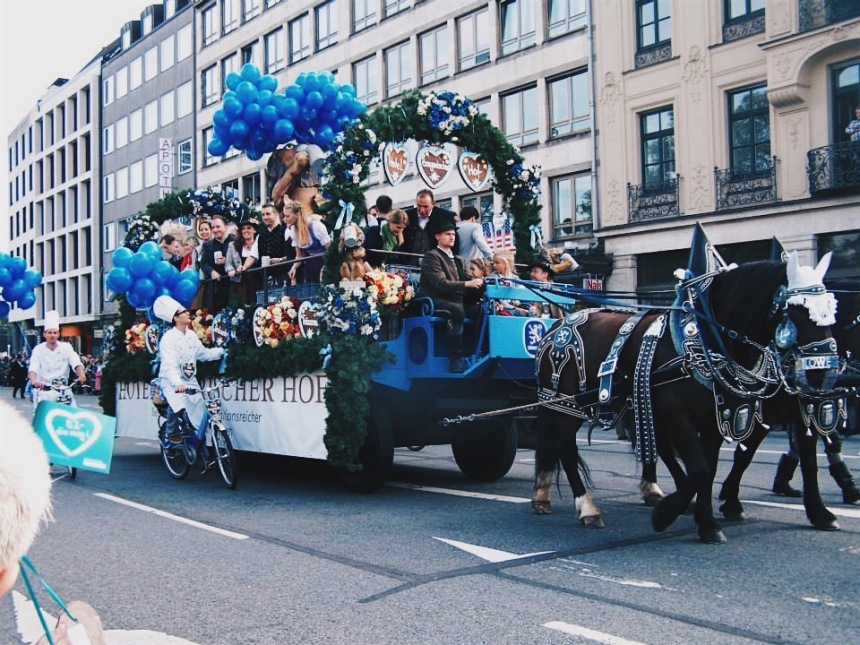 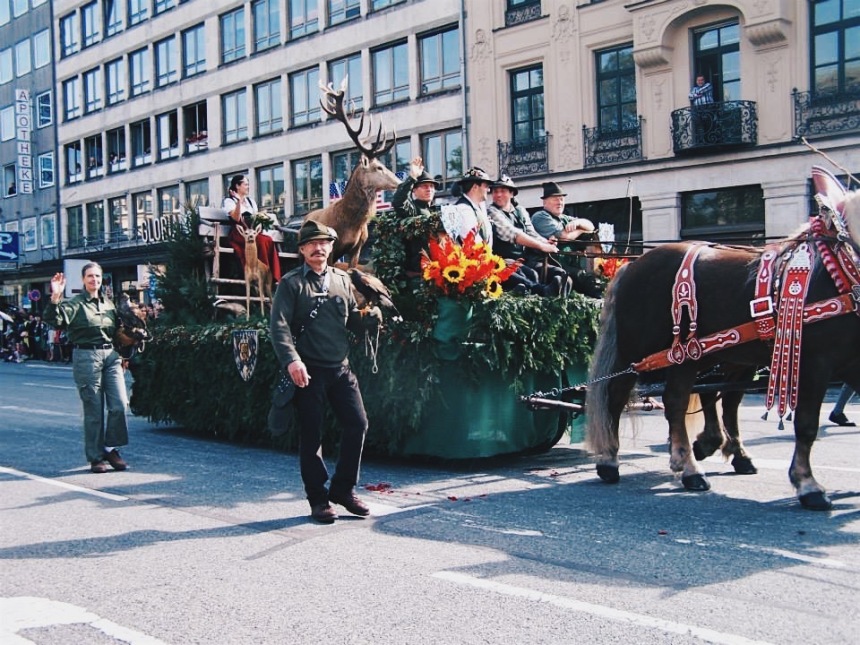 Munich is very well connected, therefore, you can get everywhere in no time. You can buy day tickets that would allow you to use subways, trams and buses in the zone you want. You would not have to mark the ticket each time you get in so it’s stress-free if you want to hop on/off! 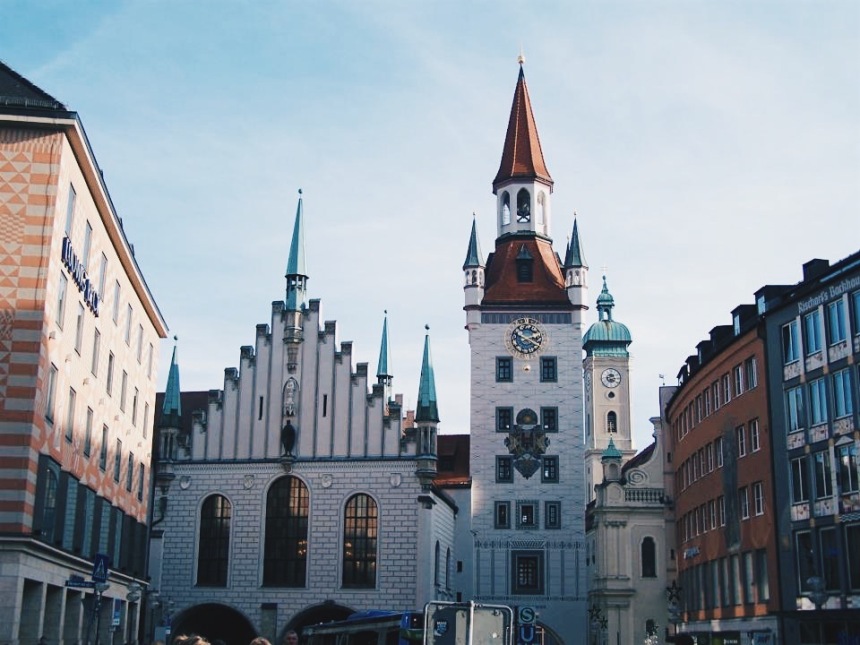 If you have some spare time, take a subway/bus or a tram to the Nymphenburg palace. It’s another perfect location in Munich if you fancy a picnic or just a sit down. There will be a few just as smart people having a bite or a beverage, running or reading. However, it feels incredibly peaceful and quiet no matter how many people are around! 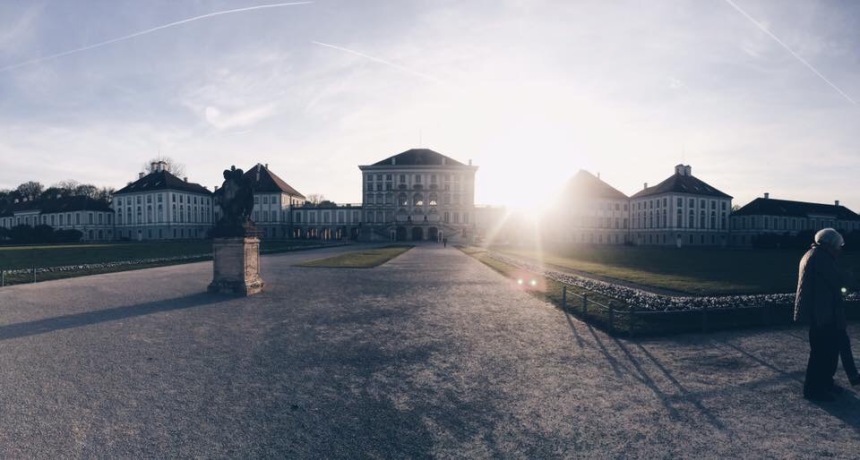 4 replies to Munich, Germany | Bavaria’s City with a Heart